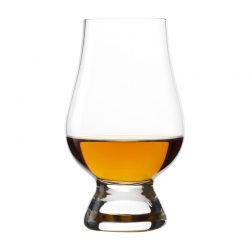 Occasionally we don’t know that we need something until we have it. Nowhere does this hold more true then when it comes to the world-famous Glencairn Glass.

For over 4000 years we have been drinking whiskey. For most of mankind’s whiskey drinking history, people drank from a “quaich”, which looks like a bowl with handles on either side. The quaich is still used as a symbolic gift in Scotland but is not generally used to drink whiskey anymore.

Next, came the tumbler. The tumbler first appeared in the 17th century and went into wide use about 100 years later. The reason it overtook the quaich was because of how quickly the price of glass was going down. It would be the preferred way to drink whiskey for hundreds of years.

But it wasn’t until the end of the 1990s when whiskey started to make a comeback that industry experts realized a specially designed whiskey glass was needed to bring out the richness of its intended contents. The Glencairn glass is exceptional because of the bulb at the bottom of the glass that creates the perfect lens for investigating the color and texture of the spirit, and the tulip shape allows the aromas to collect inside the glass which is as important to the tasting process as the flavor.

So even though, according to experts, the Glencairn glass is what you should be drinking your whiskey from, I believe that your favorite whiskey glass should always be the glass that has whiskey in it.